1944, NEAR BARTIA, EAST PRUSSIA.
A small Russian force has been thrown into a gap in the line, with orders to hold anchored on the ruins of a Volkswagon factory. Comrade Cameron has his orders to repel the fascist beasts, or not come back.


Major Dad, has been gifted a powerful armoured force to punch through the reds and create a bridgehead from which to fling the commies out of the Fatherland.

With the flexible German doctrine, a good few command rolls are passed, the Panzers are on the move.

The Russian recce unit spots the panzers, and communicates to the waiting artillery units. Minutes later, the eastern sky is lit up and a devastating concentration of eight Katyusha batteries land amongst the metal beasts. After the rumble of the explosions, and the smoke has drifted away, six of the fascist machines lie in ruins. 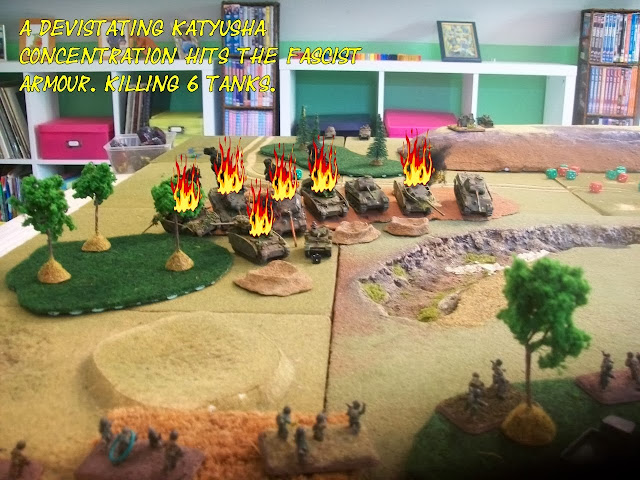 The Russians luck finally gives out. A command blunder. What! move forward? Are you sure? The metal monsters crash through the hedge, into open terrain, too late, Comrade Cameron tries to recall them, the HQ fails.


German turn 2
It's looking very grim for the German commander, he reorganises his armour, pulling them back from the hill, the Russians use opportunity fire to suppress one panther and fix it to the hill, the remaining Panther moves back into the wood, still shaken up after the artillery display.

The Panther noses through te wood and spots the IS2's in the open. Perfect. Some good commands rolls and the two of the IS2's are suppressed.

Out on the left flank the German assault group moves up fast (thanks to a command bonus roll), through the hamlet, into the woods go the pioneers, and the assault guns trundle up to the Russians hiding in the far wood, and open up.
But, no. Poor shooting from the Germans (dodgy optics. Sabotage!), and a failed command roll leaves the assault guns all alone out in the open. The infantry fail to move up to support and are lost in Hamlet Woods.

Up on the hill, things go from bad to worse as the 88 Flak blunders and has to move back. Fortunately for the German commander he left is transport behind so the gun stays put. but that's the end of the go. A quick appreciation of my position shows me a decimated right flank, a wobbly left flank and a soft centre (whilst the 88 sorts its self out).

Well its looking good for Comrade Cameron. Just one more of the fascist beasts to kill and the Germans must start rolling for their break point. The IS-2 on the Russian left opens up on the Panthers, but poor shooting due to too much vodka results in only two hits, a suppression and little else. The Germans return fire with opportunity suppressing one IS-2. Then a failed command roll by the IS-2 commander, moves the action to the Russian right flank.

The engineer commander is going to assault the Stugs. Needing an eight, fails. However, the CO way out on the right flank needs a 5 (CV9-4 for distance) to get the sluggish infantry to move. Comrade Cameron rolls....4 and the assault is on.

The assault destroys one Stug III and flings the other two back. The loss of the assault gun means the German commander has reached his break point and must roll at the start to stay in the battle at the start of his go. Can he rally the troops for another push?

The break point for the Germans is seven, which was reached last go after a Stug III went up in smoke. My CO has a CV of 9 so I'm comfortable I will make the roll. With a Prussian air of arrogance I roll......an eleven. Its all over.

The Russians hold the line, and the Germans face yet another defeat, and retreat toward the Reich. A great game. losing six AFV's on turn one unraveled my plan somewhat.

A Blitzkrieg Commander 2 Game. 1944, NEAR BARTIA, EAST PRUSSIA. A small Russian force has been thrown into a gap in the line, with orders... 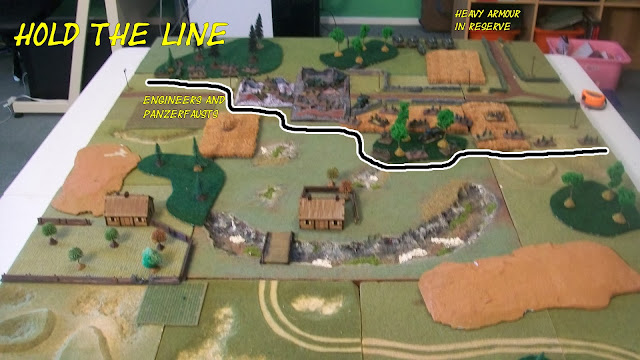